The Symbiotic Intelligent Systems Research Center aims to build a future robot society, in which robots assist people in activities of daily living, as a successor to the contemporary information society.
Interactive robots in particular are also regarded to be important as a next-generation information media device.
Robot and media technologies are necessary for compensating for the quality of life (QOL) of people living in the low-birthrate and hyper-aging society of Japan.

In addressing problems of the hyper-aging society of Japan, Osaka University has started studying and developing interactive robots ahead of other research universities and institutes in the world, and it has founded and played a leading role in a new field in robotics, Interaction.
Intelligent systems, primarily including interactive robots, are not only practically useful in providing social services for human beings but also theoretically important for offering a new research methodology for investigating engagement between human beings and robots.

The mission of the Center is to develop a society in which human beings and robots cohabit.
The Center will realize this mission in the following way: by developing new intelligent systems (including intelligent robots) as a means to study the macro-level functions and properties of human beings and their societies, and more concretely, to conduct social-experimental studies for pursuing the fundamental problems of human beings, such as intelligence, embodiment, multi-modal integration, intention/desire, consciousness, and social relationships.

In pursuing fundamental problems concerning human beings and societies, they will expand experimental environments to the real world and test the functions of intelligent systems in real-world experiments on the campuses of Osaka University and in the city of Osaka.
The sociology, ethics, and philosophy group will place the observations and experiments they conduct in cooperation with the other research groups in social contexts, and address potential problems in the society in which human beings and robots cohabit.

Concrete research plans for achieving our objectives and related achievements in the past.
The Center has mid-term and long-term research objectives to achieve in five and ten years, respectively.

(a) developing units of symbiotic intelligent systems, such as androids, robots, information media devices, and intelligent sensing systems, which are capable of providing services and carrying conversations in specific tasks in a manner comparable to human beings; (b) using those systems to understand human macro-level functions and properties, such as intelligence, embodiment, multi-modal integration, desire/intention, consciousness, and social relationships; and (c) realizing intelligent systems with comparable macro-level functions for practical use.

(a) developing intelligent systems that are to be recognized as partners of human beings with regard to specific ordinary tasks; (b) using those systems to conduct social-experimental studies in real-world environments and obtain an understanding of human intelligence and other higher-order human functions in the real world; and (c) applying such understanding to study sociological, ethical, and philosophical problems that will arise in the future robot society.

Brain analysis of the basal ganglia has found that human being learns to avoid danger in the process of reinforcement learning.
A constructive, computer-simulation-based approach to the mechanism for safety learning has replicated safety-assuring behavior and offered an explanation of how the human brain functions.
By further developing brain research in this direction, the Center aims to identify the brain functions and use the results of new brain research to improve the existing reinforcement learning and deep learning models and ultimately to realize humanlike learning algorithms in robots.

A recent study of ours constructed a system that controlled the movements of a robot hand by using magnetoencephalography (MEG) signals, and investigated signals from what part of the brain increased or decreased pain in phantom limb patients (Nature Communications, Paper 7). Another past study of ours found, by using a brain- machine interface (BMI) to connect a person’s brain with an android’s humanlike body, that even when proprioception is absent, visual observation of the android body led to a body ownership illusion (Scientific Report, Paper 8). By further developing these and related studies, the Center aims to investigate human embodiment phenomena including brain emotional systems and motor functions, build models of them, and implement such models in robots.

A previous study of ours showed that human temporal consciousness is constituted by the brain from stimuli from different modalities. This study hypothesized and verified that the temporal order of two stimuli delivered to the skin of the hand in rapid succession is constituted by the apparent movement between the location of the stimuli on the body surface and the spatial location of the hand (Nature Neuroscience, Paper 6). By developing such studies further to be applicable to more complex tasks, the Center aims to realize humanlike temporal feeling in androids. Additionally, by developing such studies to expand to other modalities, the Center also aims to build a model for the unifying principle of multiple modalities and implement that model in robots.

A previous study of ours implemented an autonomous intention-desire-based conversation function in an android, and confirmed, by making it interact with human beings, that they felt it to be more humanlike than when the function was not implemented. By developing this study further, the Center aims to develop androids that are capable of processing complex intentions and desires and acquiring intentions through engagement with human beings.

A robot was developed that was capable of expressing public and private self-consciousness, and a partial model of them was obtained. By combining such studies with the computational approach, the Center aims to investigate the mechanisms behind consciousness for both robots and human beings.

A predictive model for eye movement in a social video watching was built on the basis of the salience of the face. The model was shown to explain 60% of human eye movements. By developing such fundamental research to be applicable to practical occasions, the Center aims to implement the relevant eye movement functions in robots. 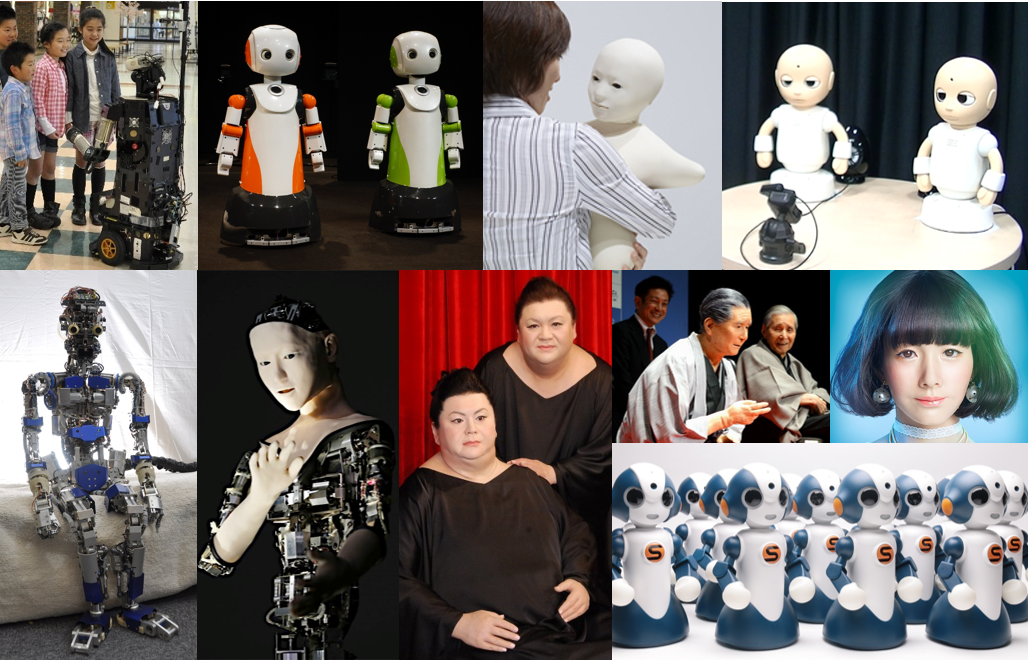 In addition, the Center will be equipped with state of the arts neuroimaging facilities as shown in the the figure above, making it world-level in the field of human sensing technologies with computer vision, as well as the field of adaptive and robust biomimetic information network technologies. Furthermore, the prospective researchers at the Center who study sociology, ethics, and philosophy have been playing a pioneering role in addressing the problems concerning the relationships among technology, human beings, and societies.

The Center, with the aid of sensing technologies, information networks, and sensor networks, aims to develop symbiotic intelligent systems, i.e., intelligent robots and intelligent information media devices, with which human beings can interact in a similar manner to how they do with other human beings.
In addition, the Center proposes to use such symbiotic intelligent systems to engage with problems in neuroscience, cognitive science, social psychology, psychology, sociology, ethics, and philosophy.
The Center will expand and develop experimental facilities and environments on the campuses of Osaka University and in the city of Osaka, to conduct experimental studies on the functions of the symbiotic intelligent robots and pursue social problems expected to arise in the future robot society.

By the end of the grant period (10 years), the Center will have developed robots capable of amicably interacting with human beings and realized sensor networks that support the activities of robots and observe and measure the relationships among human beings and robots; experimental studies will verify the practical use of such robots.
In the process of pursuing this project, the Center will also achieve a deep understanding of human functions to engage with interactive robots, such as intelligence, embodiment, multi-modal integration, intention/desire, consciousness, and social relationships.
The understanding gained about these human functions will be utilized to implement the corresponding humanlike functions in interactive robots and make them more humanlike and more amicable to human beings.

The human-amicable robots to be developed by the Center are mainly of two types: robots that are capable of learning new conversation and behaviors through engagement with human beings, and robots that feel to human beings as if they have desires, intentions, consciousness, and the self.
These types of robots are currently studied world-wide in artificial intelligence research and robotics, and the development of them promises to change the whole of human society yet again in a similar way to how personal computers and smart phones have done so in the past. The future society in which they are used is illustrated in the figure below. 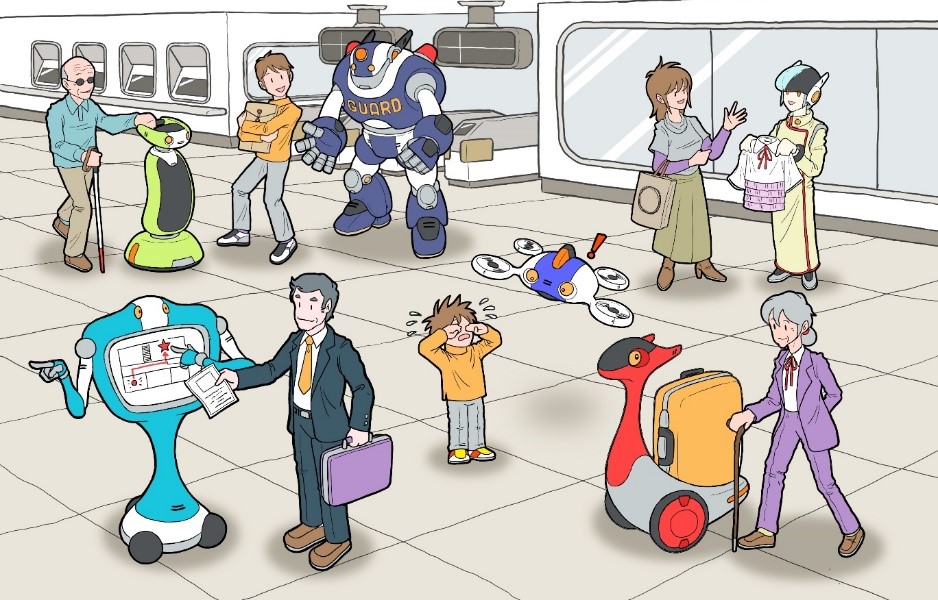 Space necessary for establishing the Center will be provided by Osaka University.
Reassembling the existing facilities, the Center will be provided a total of 2,000 m2 on Toyonaka and Suita campuses of Osaka University.
Offices of the Center are made as open and free of walls as possible, encouraging researchers from diverse backgrounds to seamlessly work together.
The sensing research and information network groups are responsible for experimental studies, and they promote cooperation with industrial companies and municipal corporations.

As is shown in the figure below, experimental environments with the relevant infrastructures, e.g., sensor networks, will be newly developed on the Suita, Toyonaka, and Minoh campuses of Osaka University, amounting to 50,000 m2 in total.
The Second Development Zone of the Umekita Area, located in the Northern area of Osaka Station (handling 2.4 million persons per day), will be developed as a research environment for real-world experiments.